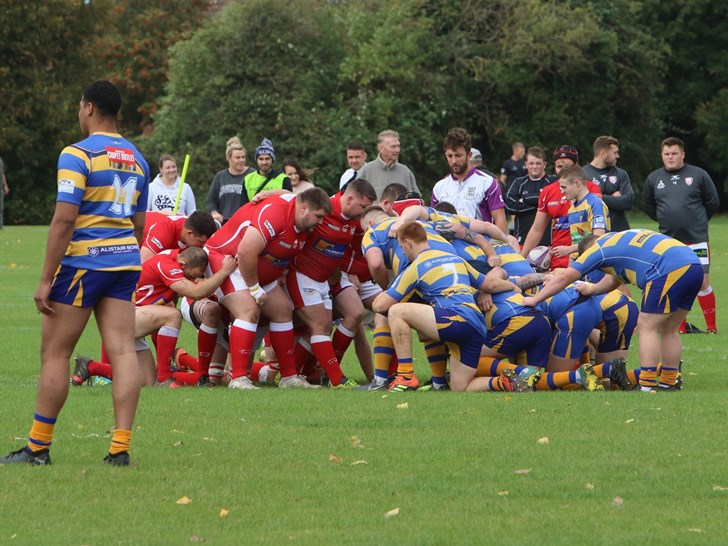 We started pre-season back in July with a new captain, high hopes and trepidation. The high hopes were promotion for the 1st team, the trepidation was for the 2nd team playing in the top reserve league, rubbing shoulders with the likes of Drybrook and Lydney. Pre-season is a necessary evil, and one not enjoyed by all, but fitness levels were achieved (by most), and we were graced by the presence of Dave Edwards for the first time in a number of years, which was lovely. We played three warm up games, two against higher league opposition, managing to beat Matson, so hopes were indeed high for the league campaign. The 1s kicked the season off with five straight bonus point wins, scoring hat fulls of tries along the way, with Tom Barton benefiting most from his new position at 13. The 2s had a tougher time, putting in committed performances, but ultimately not having enough to beat some very big clubs, although they didn't disgrace themselves and had close encounters with Cleve and Drybrook.

As the season drew towards winter, the weather deteriorated, but spirits were lifted with the commencement of the World Cup. It was the World Cup however, that would influence our first defeat of the season. Due to travel to Whitehall on the weekend before the world cup final, the weather was atrocious, rain lashing down, and the pitch underwater.  Under normal circumstances we wouldn't have played the game, but with the fear of being forced to play it the following week, the same Saturday as the final, I decided to go ahead with the game. Whitehall coped with the conditions better than us and came away with a 10-5 victory. In hindsight, the RFU didn't force clubs to play the following week, so I take full responsibility for that decision and result.

Normal service was resumed by beating Berry Hill at home, but unfortunately, due to weather and player unavailability, the 2s weren't to play again until 30th November, going down to a well drilled Old Cents side. The 16th November saw the first of the 'big clashes' of the season against fellow promotion hopefuls Cheltenham North. This also coincided with the Cheltenham races, and many of our players had dreams of winning big, so opted for a day out with the Fillies, instead of helping the promotion effort. Predictably we came up short, stumbling over our first big hurdle, not unlike some of the horses running a few miles down the road. To rub salt in the wound we also lost influential players Jed Jones and Mark Hancock to long term injuries.

We got back on the horse (more horse references, let it go Tom) with a bonus point win against Cheltenham Saracens, before entering into the second 'big clash' of the season against runaway leaders, Chosen Hill. Chosen had recruited former player Rich Planchant as coach from Cinderford, who had put together a very useful side and were steamrolling every team in the league. We went into the game without the self belief that we could win, and despite having the lion's share of possession, we lost 26-3, which turned out to be the best score anyone could achieve against them this season, it also saw the last of Steve Philips for the season, who succumbed to a knee injury. The 2s finally got a game during this week, taking a scratch side to Thornbury, playing well despite losing 57-10.

With Christmas looming we were falling behind the top two and needed to put together a string of results to close the gap, and victories against Frampton, Widden, Richians and Ross did just that, the highlight being our most complete performance of the season away at Richians. All 18 players were outstanding and we scored some excellent tries, this period also saw the emergence of number 8 Matt Fatica out of the shadow of the injured Steve Philips and the departed for Chosen, Tom Harvery. With the gap between us and Cheltenham North closing, bonus points were going to be important, and the victory against Ross highlighted that. Frustratingly we only managed three tries during this game, thus 'losing' a point in the race for second. The 2s managed to fulfill two games during January, losing a close encounter against Old Cryptians and travelling to Cleve to take part in a very high scoring game. Getting a seconds out was proving tough during the winter months, but credit to captain Martin Deacon for sticking with it.

January also saw a return to the club for Mike Hagan, who took up the role of player/coach. This was a welcome addition to the team and added more quality to the coaching staff. Into February, and confidence was high, as it turned out, too high. Some players were so confident of victory against St Mary's on 1st February that they sank 20 pints of dark fruits the night before in preparation. Needless to say this preparation had the opposite effect, losing 36-28. Strong words were exchanged, and to their credit, the players admitted their mistakes, vowing to clean up their act.

Due to weather and free weekends we weren't able to put the mistake right until 22nd February, where we avenged the earlier season defeat against Whitehall, we followed that up with a resounding away win at Berry Hill, followed by a great stopper through the forest. These victories, and Cheltenham North not playing, put us into second place, albeit, with them having two games in hand. This set up the second of the 'big clashes' against Cheltenham North nicely, and it didn't disappoint. We put together a vintage performance, nullifying their two big threats with an exemplary defensive display, and a text book counter attack strategy, winning 19-5. This put us eight points ahead in second, having played two more games, North won one of their games in hand, leaving them three points behind. We were confident of winning all our remaining games and securing that second place, but little did we know that this would be the last rugby played. The seconds played once during this period, playing Lydney on the 3g surface at Oxtalls, the fast playing surface suiting their sharp backs.

The final league table after the suspension and cancellation of the season saw us in second place on 68 points, winning 14 of our 18 games, no-one knowing what the outcome of the season was going to be. We were hopeful of promotion, and coming out on top of whatever complicated equation the RFU came up with to decide the leagues. As it turned out, their formula was fair and we can have no complaints, ultimately finishing 3rd. We can point to any of our four defeats and say they were the turning point, and we know as a squad that we should have won at least two of those games.

Overall this has been a positive season, played 18, won 14, lost 4, points for 547, points against 297, these stats would count as a success in anyone's book, but promotion was the target, and that was not achieved. The seconds had a very tough season, but let's not forget they were playing in the highest reserve league in Gloucestershire, and many of the teams they played have 1st teams in much higher leagues than us.

I would like to thank everyone who wore the Longlevens shirt with pride this season. Although we came close to achieving our target, we fell short, but, we grew as a squad and club, improved every aspect of our game and blooded five 17 years olds from the U18s, which in this climate in excellent, and bodes well for the future. I would also like to thank all the coaches, from 1st team coaches, Andy Wadley and Mike Hagan, to junior and mini coaches, who are providing for the future of the club. Other people that deserve thanks are Colin Rose, for the support he offers each Saturday, Anna King and her team for keeping the beer flowing, new 1st team captain Josh Lyons and Martin Deacon for keeping the 2s afloat. This season also saw Jake Kitson gain 250 1st team caps, a great achievement, but one that will unfortunately see him into semi-retirement and shopping with the Mrs on a Saturday afternoon.

We now go into the unknown, not sure when we will see rugby at Longford Lane again, but knowing that when we do, we will have another crack at promotion, see a 2nd team in a more competitive league, hopefully have a 3rd team, and maybe a cup run to Twickenham. What we do know is that we're all missing rugby, and all it has to offer, hopefully we won't take it for granted when it returns.

I hope you're all enjoying lockdown