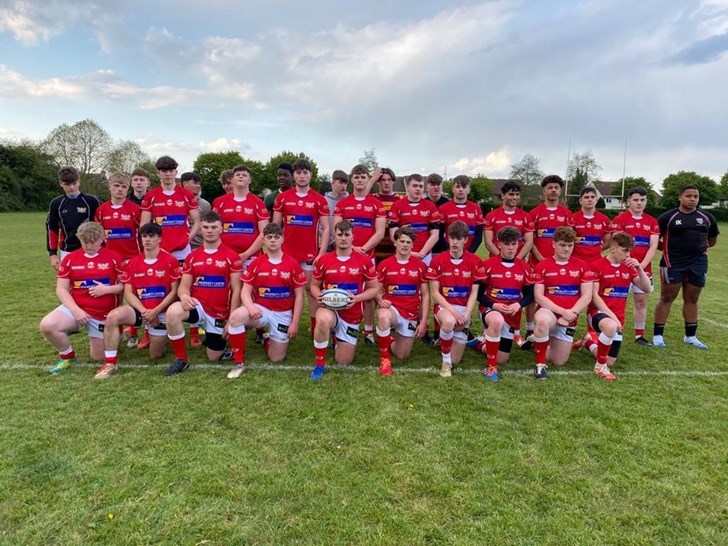 The sun shone on Longford Lane, home of the Griffins and Longlevens Rugby  Colts hosted Cheltenham Tigers.  A long history of hard-fought games exist between these 2 clubs and this game was no different.

Cheltenham started strongest utilising their athletic pack and keeping the ball in the Longlevens half.  The pressure resulted in a penalty to Cheltenham.  A tap and go released the back line and Cheltenham scored the first try in the corner.

Longlevens responded quickly and kept the ball tight with the forwards.  Powerful play by Captain Jack Stanley, Jack Muncaster and Elliot Norwood set the platform for prop Alex Roberts to score from short range under the posts.  Carlos Jenkins converted for the extra 2 points.

For the next 10 minutes both teams played for territory utilising the accurate kicking by Josh Dingwall.  However, strong tackling from the Cheltenham team and Longlevens Flanker Jack Beecham kept the try count to 1 a piece and the end of the first quarter.

A restructure of personnel changed the game plan for Longlevens with a more direct approach being preferred.  Breaks from Jack Cuthbert, Oscar Berry and Isaiah Khisa in the forwards pegged Cheltenham back and created space for Winger Iman Hussain to score 2 tries out wide following accurate passing from Isaac Meredith, Joe Wheeler and Louis Tiley in the Levens back line.

Longlevens continued to dominate the half with sniping runs from scrum half Luca Caldarone, winger Brendan Johnstone and back row Coby Wynn.  The pressure was too much and Cheltenham defence took out winger Iman Hussain illegally following a through kick.  From the penalty, quick passing and accurate offloads saw Oscar Berry score under the posts.  John Lindsay stepped up and slotted the conversion.

Cheltenham  started the second half with the same tenacity as the first scoring 2 quick tries to get them back into the game through their strong forwards creating line breaks and pushing Longlevens back.  Longlevens regrouped and following a pin point accurate kick through from full back Jack Robbins, winger Fin Garfield went over in the corner.

Into the last quarter and strong line out work by Robin Hanman and Blessing Mwaisoloka secured good first phase ball for Longlevens and set a solid platform for more attacks.  Cheltenham strong defence held firm.  Powerful tackling by Longlevens centres George Butt and Connor Maguire also held back the quick Cheltenham attack and successfully turned over possession.  Another strong run from inside the Levens half by Fin Garfield broke through four tackles and from the cleared ruck, quick hands across the backs saw Carlos Jenkins score in the corner.

Late on, Cheltenham scored a consolation interception try but it was too late.

Man of the match went to Iman Hussain for his well taken 2 tries with Fin Garfield narrowly missing out.

Next Sunday 16th May sees the return fixture at Newlands, Cheltenham.  12:30 KO.