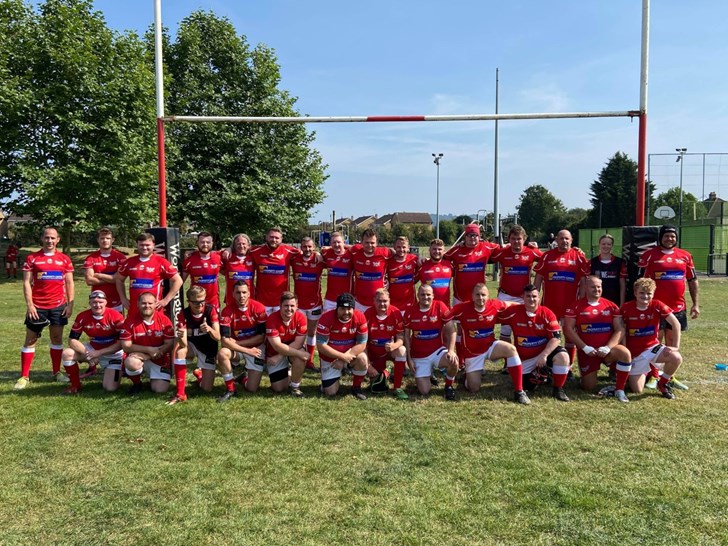 Match Report Longlevens MAR v Dowty Legends 05/09/2021:
The sun was shining in Longlevens this afternoon. This was a charity game. One of the Longlevens MAR players Jim Jervis has a friend who had a defect in his ivc (Inferior Vena Cava) Which is the main vein returning the heart from the lower body this was completely blocked by blood clots this also affected the torso causing chronic venous insufficiency which occurs when your leg veins don't allow blood to flow back up to your heart normally.
He found out that by continuing to train his body it helped him keep a positive mindset despite his condition worsening. He had life changing surgery but the damage by all the blood clots was irreversible and now he suffers with post thrombotic syndrome. He constantly has to start all over again and learn to do everything again. He is also in a wheelchair. Due to covid he couldn’t do anything, and it got to a point he wasn’t able to go out for walks with his family.
The only treatments for him are not available to the NHs. Which is why we are doing this game today and raising money to get him closer to having the treatments.
Unfortunately, Jim Jervis couldn’t attend today due to ill health. Everyone at Longlevens wish Jim a speedy recovery and hope to see him at Longlevens rfc soon.
As this was the first game in 18 months there were lots of debuts for Longlevens today as new players have joined the team since the last game.
Dowty Legends started the strongest with the edge in the set pieces. They went two tries ahead in the first quarter with one conversion, but Longlevens heads never went down.
In the second quarter Longlevens started coming into the game with strong runs from Gary Shaw and Daf Brown. Longlevens got on the score sheet in the form of a try from scrum half Jez Wilson.
The third quarter Dowty legends scored from a good lineout move. Daf Brown used his dazzling feet to make a fantastic break which nearly resulted in a try.
In the fourth quarter Longlevens came out firing. It was all started by an exquisite kick from Longlevens winger Jack Giles.
Then Longlevens got the ball out to there winger Jack Giles who used his lightning pace to out pace the Dowty defenders to score in the corner on his Longlevens debut.
Longlevens weren’t done there they got the ball to Jack Giles again he gained ground down the wing then passed it inside to Amelia Tindall who scored on her Longlevens debut. This was a special moment for the Longlevens MAR team. Amelia is everything MAR stands for she never backs down from anything and has been doing good in training so for her to score it meant a lot to the Longlevens MAR players and coaches.
Full time Longlevens 15 Dowty Legends 17.
After the match we all just had a talk and ate chilli and rice the food was good, which was provided by Bear Grills at Longlevens Rugby Club, which we were very thankful for! So, all in all a fun day had by all and raising money for a really good cause.
Congratulation to Jack Giles and Amelia Tindall on debut tries both key members of the MAR team.
Longlevens Man of the match: Ian Hobbs.
Today was Ian’s first game in 15/16 years and he lasted 70 minutes. He also put a massive amount of work in. Well done Ian.
There was also history made today too. Congrats to Darren Herbert and Amelia Tindall for being the first stepdad and daughter to play in the same team for Longlevens. A proud moment for both.
Thanks to Jez Wilson and Jim Jervis for organising this event.
Final thank you goes to the Dowty Legends players and staff for coming down and playing us and giving us a cracking game.
Report by Sam Galliers
Tweet
Tweets by @Longlevensrugby